Another NeoCon has come and gone, and furniture makers this year had a lot to say via the new designs in their showrooms. From a focus on better human health in the office to a spin on funky, fresh design aesthetics, this year's largest commercial office furniture show was filled with bright and exciting new trends.

NeoCon 2017 was all about graphic prints, bold colors and tons of texture. We saw several colorful showrooms, some of which were decked out in a single bright color and others with a much broader palette. Unique textures were present not only on seating but on desk fronts and shelving as well. Various textures brought new life to furniture that would have otherwise been old news. Décor including pillows and rugs were most often seen in animal prints and textures, including sheep wool and cow hide that was soft to the touch. In addition to upholstered texture, we also saw many instances of DIY office décor that brought visual texture to the various showrooms throughout NeoCon. 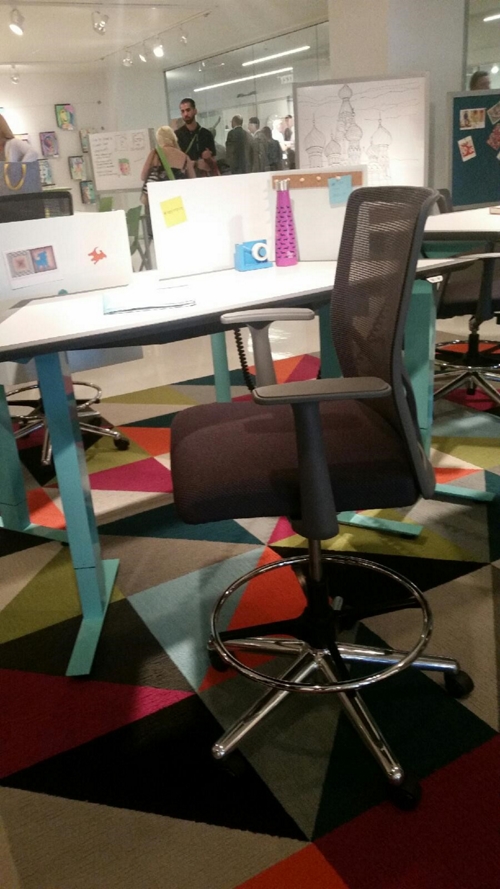 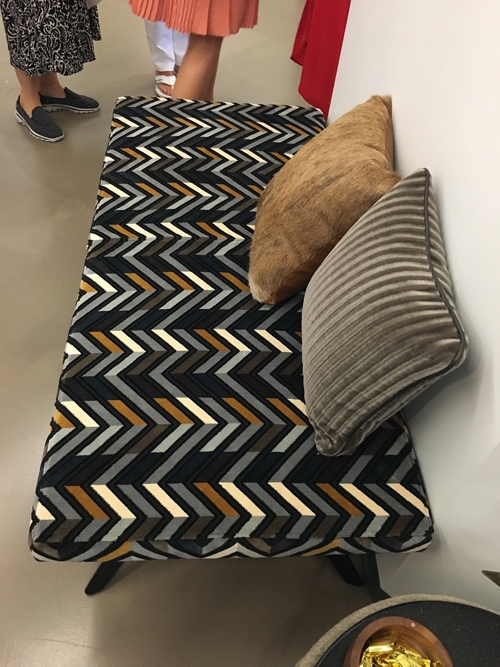 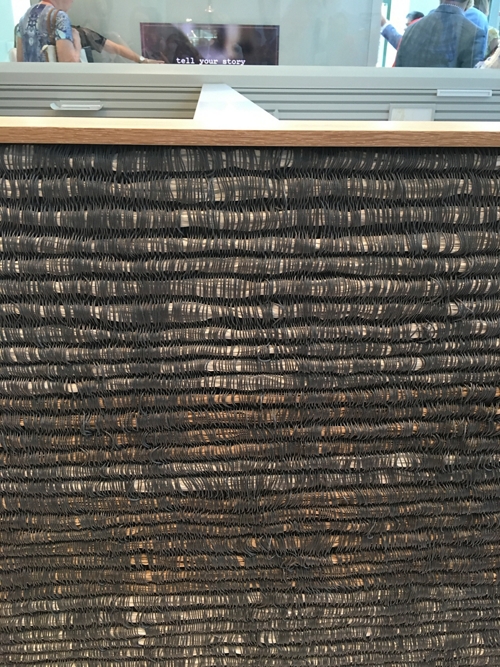 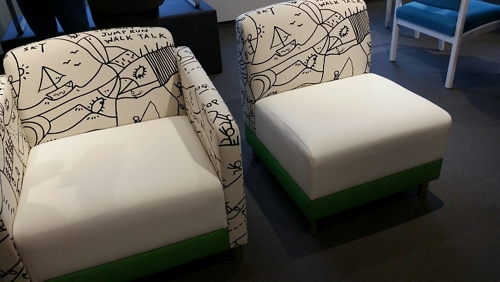 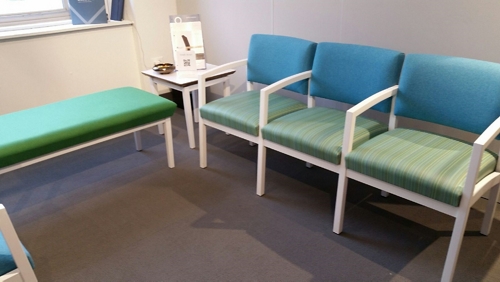 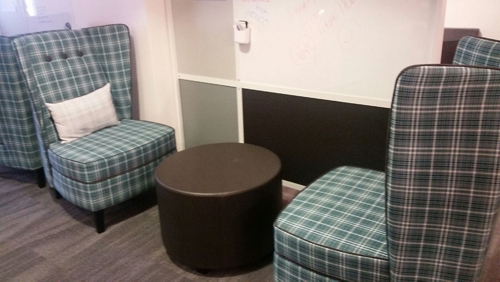 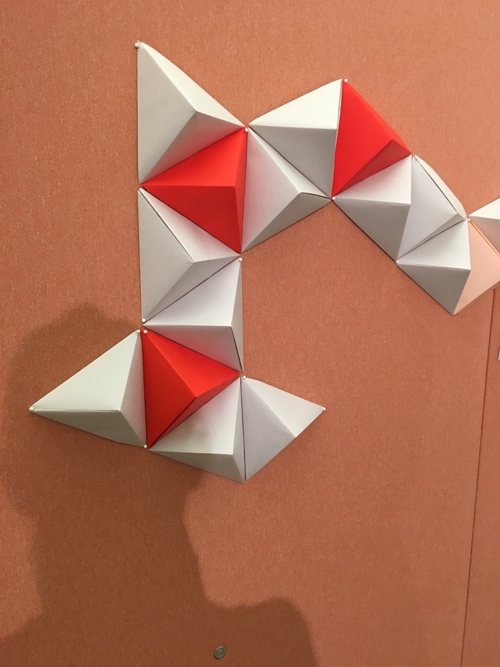 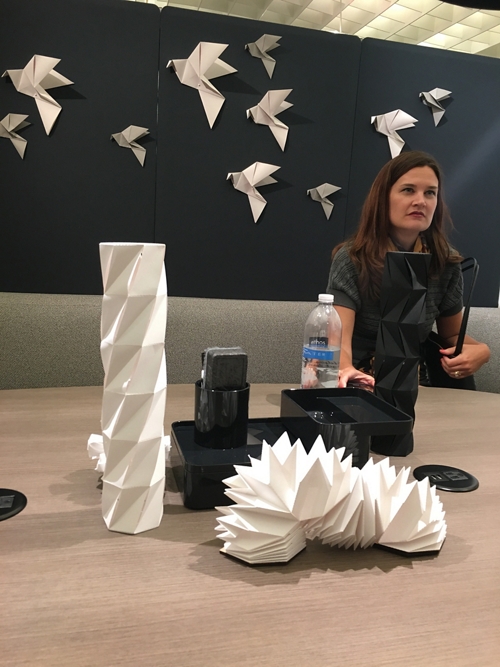 Active working is a fairly new trend that we've seen at the NeoCon showrooms for a couple of years now. At this year's show, we saw the trend evolve from ball chairs and adjustable desks to leaning stools and wobble boards. "Perching" appears to be the new standing, as it positions the body into an upright leaning position, allowing for proper blood flow and a greater level of comfort. In addition to products that assist with active seating, we also saw products that enable employees to be more active while standing. Most notable of these is a new surfboard-like tool called Kick from Safco which allows the user to wobble and shift his or her weight while standing at a workstation. 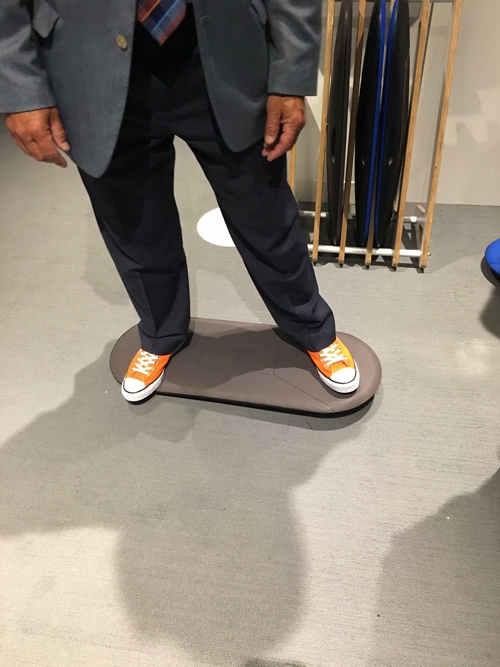 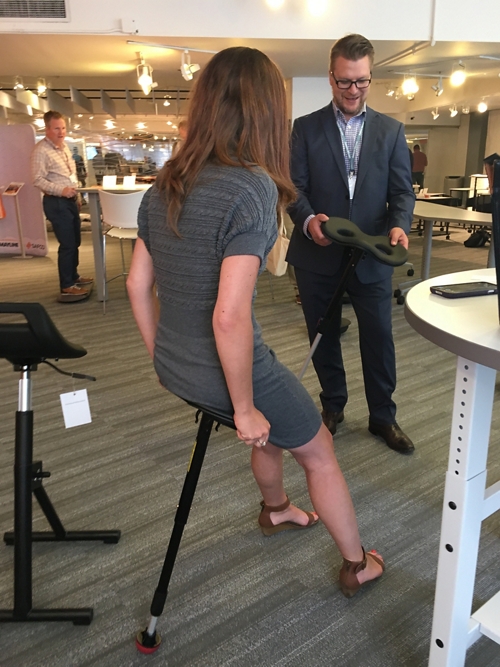 In addition to a plethora of standing height desk options, we also saw desks with other features that help boost productivity. One of the biggest trends was whiteboards across every surface. From desks with whiteboard panels to tables with built-in whiteboard tops, everywhere you looked there was a surface that could be written on. Built-in office supply holder cups and paper trays were also common, as were built in charging not only within desks, but waiting room seating as well. One particularly surprising trend we noticed in many showrooms was the move to tall, skinny filing pedestals as opposed to the traditionally short and wide lateral files of the past. 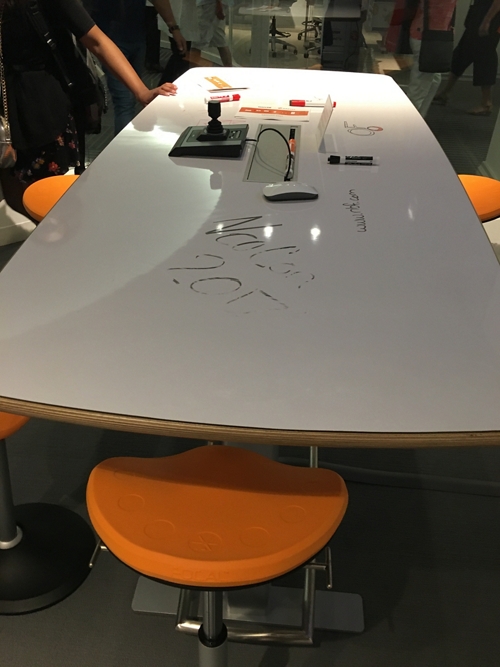 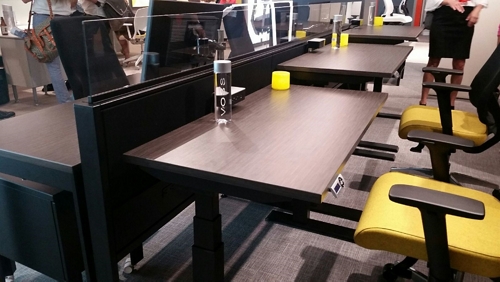 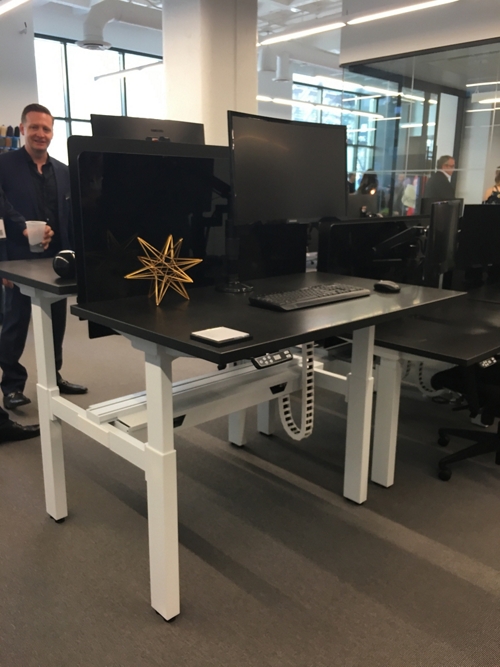 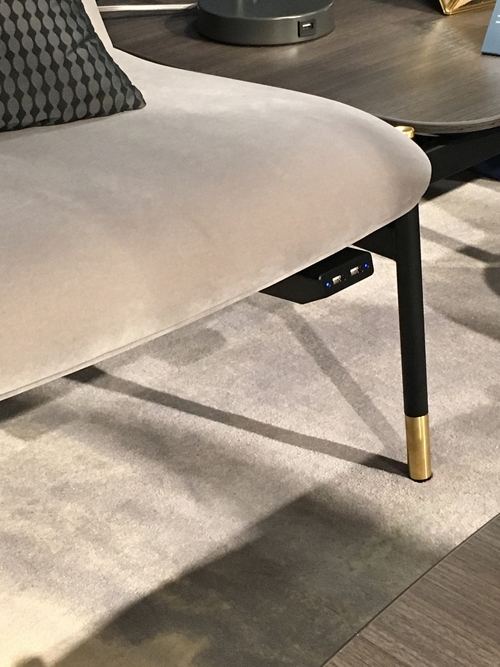 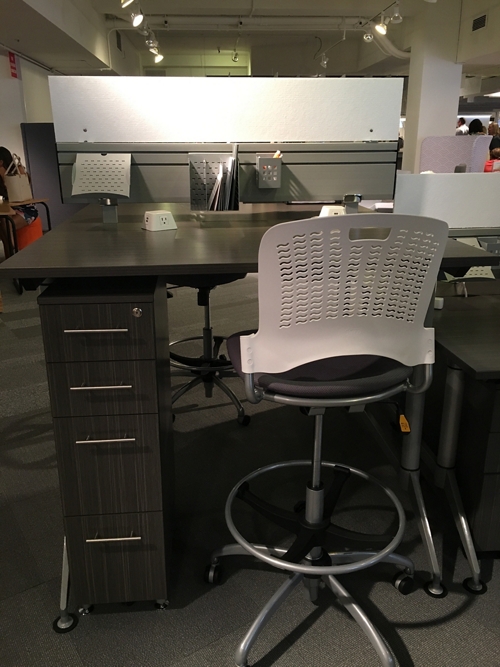 With the growing popularity of the open office comes the need for designated private spaces, and we saw a ton of creative solutions to this common office problem at this year's NeoCon show. First, we saw some variation of a single-user pod-like workstation similar to Steelcase's Brody at nearly every A Grade manufacturer we visited. In addition to workspaces, the need for private meeting spaces seemed to also be of top concern. From movable room dividers to tiny house-shaped pods to cocoon-like teleconference spaces, there were private spaces galore at many of the showrooms. 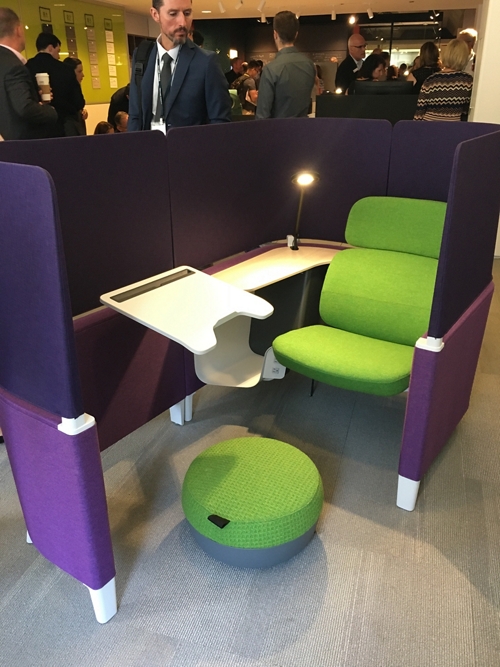 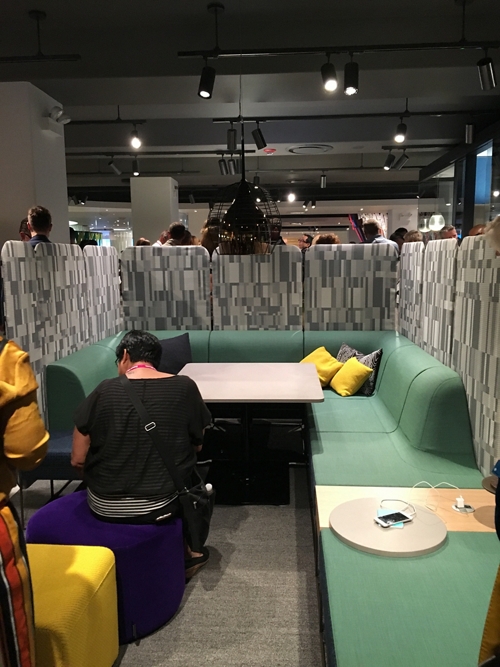 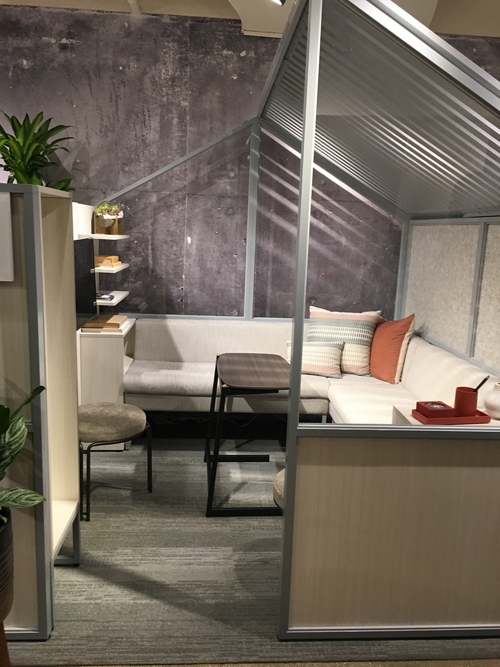 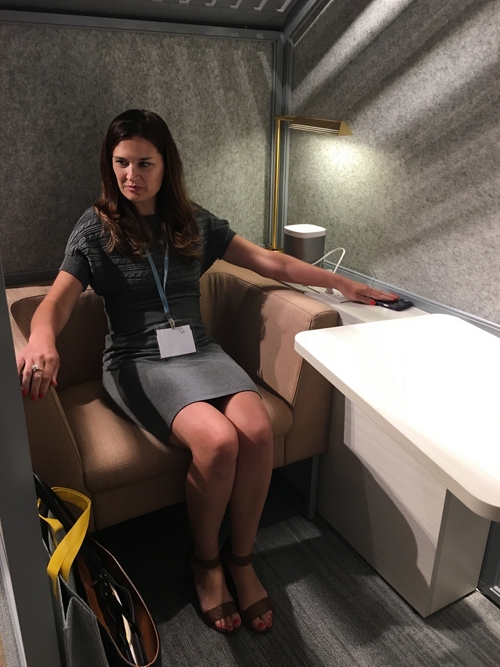 What are some trends you want to see in the office this year? Watch the video below to see for yourself what the experts are designing!

It was another exciting year at NeoCon in Chicago. In case you’re(break1) not familiar with NeoCon, it’s the big event every year where office furniture manufacturers come to display their latest and greatest innovations in furniture design. It’s a great place to see new styles in office furniture and to catch up with industry friends.

Trends for Healthcare Spaces at NeoCon 2014

NeoCon, one of the largest trade shows in the furniture industry, took place last week, Monday, June 9th through Wednesday, June 11th. The event features showrooms from top furniture brands and focuses on commercial interiors. NBF, as a large retailer of commercial-grade products, attended the conference to not only see the new design trends, but to also interact with vendors. As we posted previously, there were many trends that we saw emerging consistently throughout the numerous showrooms. One such trend was the emphasis on healthcare segments. While healthcare is a well-established niche of the furniture industry, there were a few developments and trends that could not go unnoticed.

Whether you’re furnishing a new healthcare facility or replacing old furniture in a hospital or private practice, knowing your textiles is crucial to the well-being of staff and patients alike. To help make your chair purchasing experience as easy as possible, we’re breaking down the pros and cons of commonly used seating textiles. This list is ranked from worst to best in terms of appropriateness for a healthcare setting.